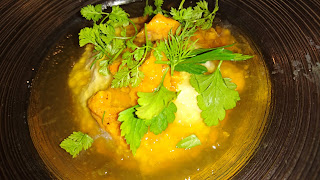 I organized a round table talk today: How I Acquired My English in Japan.
After the two hour session, 4 of us went to Bistro Eureka in Shimokitazawa.

Everything was heavenly, but this was unique and such a delicacy.

The white creamy thing is turnip mousse.  Then consomme jelly and sea urchin

was put over that.  Several herbs such as dill, fennel and Italian parsley were added as toppings.

Posted by Yasuko Watanabe at 10:47 PM No comments:

Well, there were things I had to give a thought to.    Someday I might write, but for now, I shouldn't.  I do not remember anything special on that day I stopped writing in 2014, but definitely the March 11,2011 and Tsunami was something which affected me in many ways...... Tsunami, Earthquake, Nuke Plant, Radiation, Contamination etc. etc....

Around 2014 I guess it became difficult for me to keep writing.

However, my life is limited ( don't worry, I have not been diagnosed as cancer or anything!  I should say - Our lives are limited! ) , which I just realized after some friend's death again, so will do whatever I can while I am still alive.