Order through Display on the table 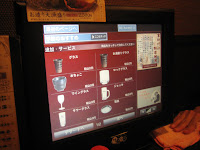 On this past weekend, I went to my friend's live and afterwards joined the dinner of the group. It was casual restaurant with tasty Japanese food and drinks. People from the group were very nice and friendly, so I fully enjoyed the dinner.
You see a display here. You can order food and others by pressing the button on this. This photo is showing the plates and cups and glasses. Yes, when you need more clean plates, cups and glasses, you press the screen of that and waiters and waitresses bring them for you in seconds !
I heard this is not so rare at this type of restaurants lately. Wow, I didn't know it.
Posted by Yasuko Watanabe at 10:04 PM No comments:

Email ThisBlogThis!Share to TwitterShare to FacebookShare to Pinterest
Labels: Trend 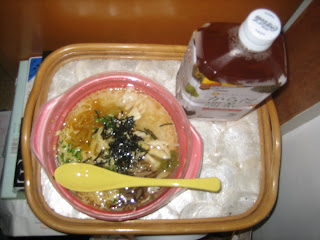 I just realized another week passed so fast and hadn't written for a week. Tonight's dinner was ready-made KEIHAN, which is Amami Oshima ( Southern island near Okinawa ) 's food. It is said that local people made this to treat Clan Officials.
Shredded chicken, egg, green onion etc . with rice and soup. Good for tired stomach !
There are much more food pics, but for tonight, just put this photo.
Amami Oshima belongs to Kagoshima-Prefecture,but it was sometimes ruled by Ryukyu ( Former Okinawa ) . So, their culture is influenced by both Kagoshima and Okinawa. If you have a chance, please visit. In a way, it is similar to Okinawa, but something is different.
There is also an art museum of Isson Tanaka. His drawings is very accurate and has tropical and some Western flair. That is probably why he was not well accepted by main stream people back in those days. I don't do diving lately, if you are a diver, it is also a great place for that.
Another attraction is to see pongee fabrics. Its color is subdued mud, brown gray. Elegant and quality products.
Posted by Yasuko Watanabe at 8:42 PM No comments: